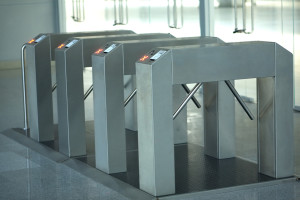 Aicent Security specializes in designing and installing protective mechanisms in homes, commercial complexes, and even in government compounds. We offer protection that starts with installing access control systems to the entry points of buildings and establishments.

Among the technology that we provide our clients are various access control systems. These systems are meant to restrict the personnel who can enter or use a physical space or room, such as in the store fronts or office doors, or in banks or vaults, archives room, and such things. They are also used to regiment the schedule of usage of spaces in any building, especially in the case of time-sensitive content or pattern-encrypted functions kept inside a room, such as in laboratories. Access controls are usually associated with preventing or managing entry to a room, although they are also used to control and manage exit, such as in shops or stores.

Access controls can be as simple as a lock-and-key mechanism, turnstiles, or a fence. Mechanical devices such as mantraps can also be used upon the request of our clients. However, the capabilities of these can be limited, specially because they do not store individual information for users, and so they can used by unauthorized persons should the keys be misplaced or stolen.

For a more complex system that is hard to beat, Aicent also provides electronic and automated access controls. Electronic access control mechanisms are controlled with computers that can be programmed for a wide variety of functions. Among them are controls that allow access based on different identity markers, among them identification card or numbers, departments, or managerial levels. Some, as in the case of banks or some boutiques only open at a pre-programmed schedule, with any attempts to open it on another schedule recorded and/or triggering an alarm.